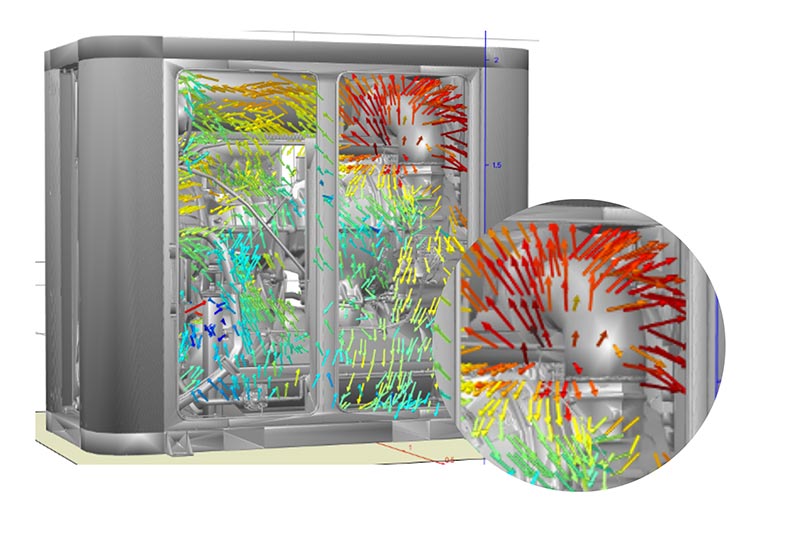 We wanted a rigorous approach to identify and precisely target key noise sources in our new blower, to efficiently achieve a quiet product.

LP2 is the first fully packaged blower manufactured by Lontra using its proven patented BladeCompressor. It operates at up to 1barG, delivering up to 2600m3/h of air at 2500rpm. It is a positive displacement machine, which produces 1 discharge per revolution, resulting in low frequencies of emitted noise. This poses some unique acoustic challenges for various aspects of the design and led us to use the Microflown equipment.

A 3D model of the compressor and enclosure is imported into the software where the sound field can be visualised and quantified. The tool allows us to identify sources within the enclosure, prioritise and precisely target them with minimal modifications and cost.

The key benefit from Lontra’s perspective is the ability to accurately resolve frequencies below 50Hz, which is critical due to the low running speeds of the LP2. The Their equipment can also calculate sound power even when used in relatively small test cells, which is important to avoid costly facilities.

Due to the size of the LP2 package, the outside of the enclosure required around 16 individual trajectories, by repositioning the 3D camera. All the trajectories were analysed together in the Velo software, giving a single processed dataset. A 3D model is used as a visual reference as well as to automatically position the 3D tracker into the measuring environment.

The results were used to inform design changes, which were implemented into a subsequent enclosure:

The improved enclosure was then scanned again, and the results compared to quantify the improvement. 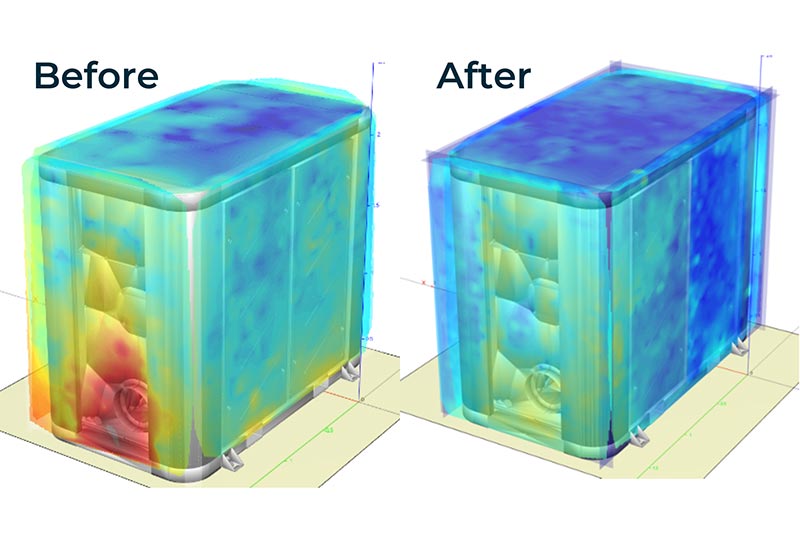 When first identifying regions of interest, we use broad frequency ranges, such as shown in Figure 1. Here they show the effect of improving the design of the cover over the compressor outlet pipe, which was previously rattling, causing emissions over a wide frequency range. This change helped contribute to a greatly reduced A-weighted emission from the rear of the enclosure.

The scans allowed us to conclude that the front panel was not itself a source, but primarily an emitter of vibration transmitted to it from the rear panel by the inlet silencer, which acted as a bridge between them.

By using much softer anti-vibration mounts for the inlet silencer, the transmitted vibration was reduced, and emitted noise from the front (especially at low frequencies) was greatly reduced, as seen in Table 1. 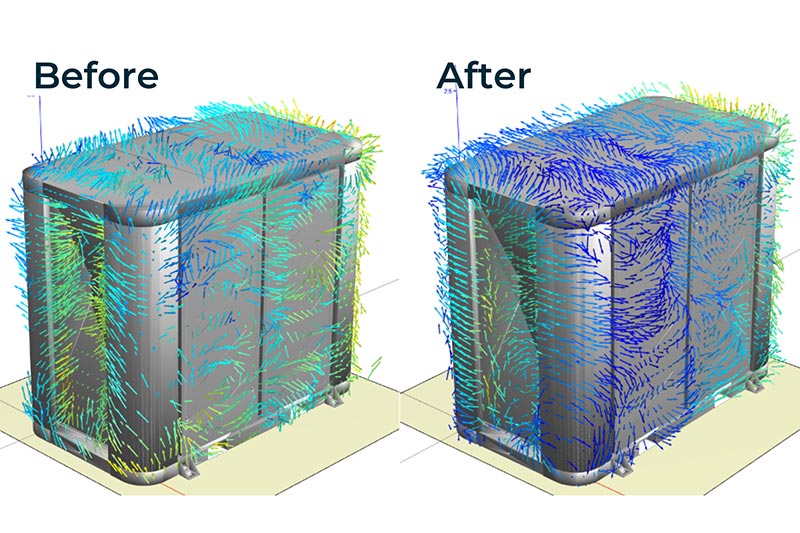 Although it was originally thought that the greatest source of fundamental pulsation would be from the airend inside the enclosure, this data shows that the source is in fact the inlet silencer atmospheric air intake, and the noise enters the enclosure interior only through the cooling fan located next to the intake. This meant that the best way to reduce excitation at the fundamental frequency was by redesigning the inlet silencer to better attenuate around 42Hz. 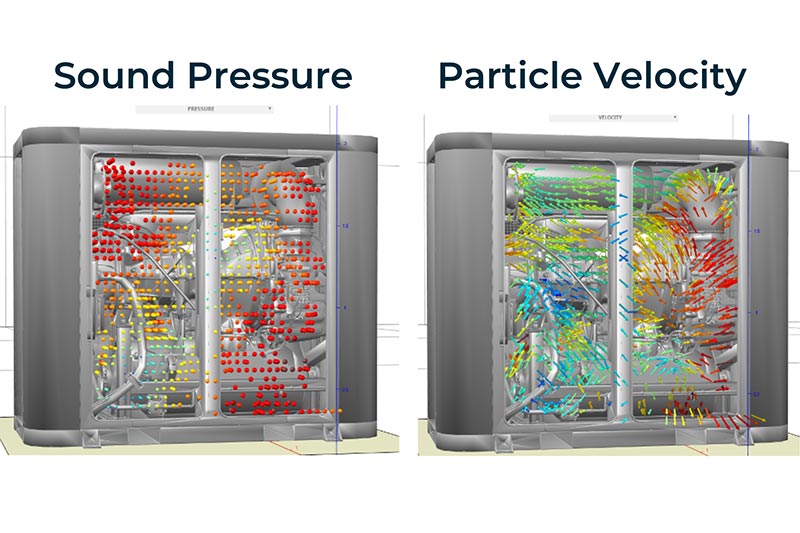 125Hz was identified as an important frequency for noise emission from the enclosure, so it was important to identify its internal sources. Particle velocity should provide far better spatial resolution than sound pressure for the purposes of source localisation. Figure 4 shows that while sound pressure suggests that both the atmospheric inlet region and the outlet silencer could be sources of 125Hz pulsation, particle velocity shows that it is most likely to be emitted by either the front of the airend or the front of the outlet silencer.

This meant the new inlet silencer did not have to be optimised for 125Hz, which was an important design decision.

At higher frequencies, we analysed the spatial data in octave bands (Figure 3), as opposed to individual tones. One clear source was the inlet air pipe, which carries air from the inlet silencer to the airend prior to compression. This angled pipe is made of reinforced silicone, so greater emissions were to be expected compared to metal components. Being a soft material in comparison to metal components, emissions from this pipe could be used to give an indication of the spectra inside the pipe, as they should not contain any ringing modes of the pipe itself. 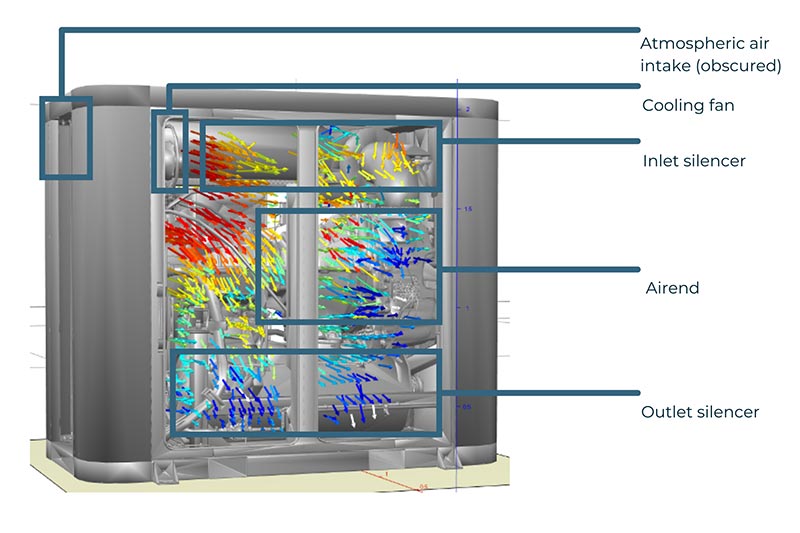 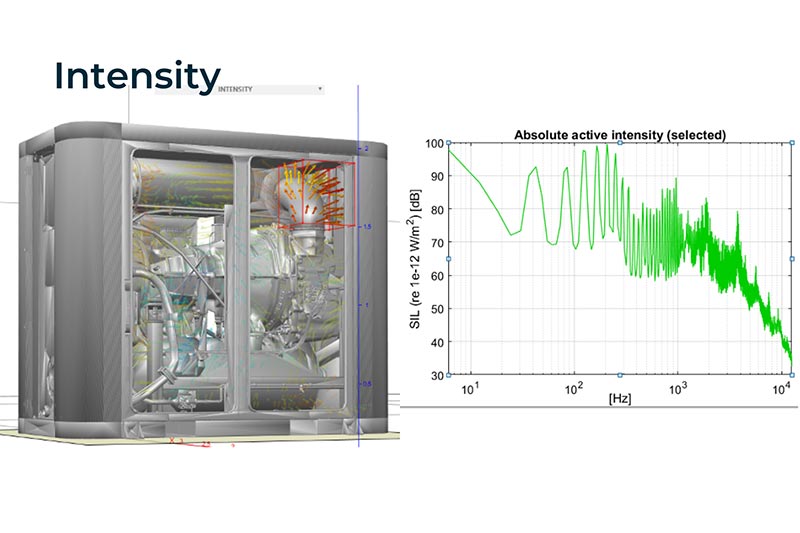 Defining a volume around the inlet pipe allowed a spatially averaged emission spectrum for it to be generated (Figure 6). This shows that the peak emission is around 200Hz (5th tone). Since this frequency is not prominent in downstream pressure transducers, it is most likely caused by reflected pressure waves between the silence and airend. This will need further simulations to confirm, but since it is not a prominent tone at the atmospheric inlet, it suggests the silencer is already effective enough at attenuating this frequency.
We know from the previously shown data that there is strong 125Hz content emitted inside the enclosure, so looking at this frequency on the external scans should highlight any unsealed gaps which may be allowing noise to egress. Other frequencies will be let out of these gaps as well, but looking at 125Hz should make them easier to identify in our particular case.

Figure 7 shows that using this approach with narrow frequency bands, Scan & Paint allows identification of these small sources, such as the two loosely fitting doors highlighted here. The doors have rubber seals, but in this case the fault was with incorrectly tensioned latches. 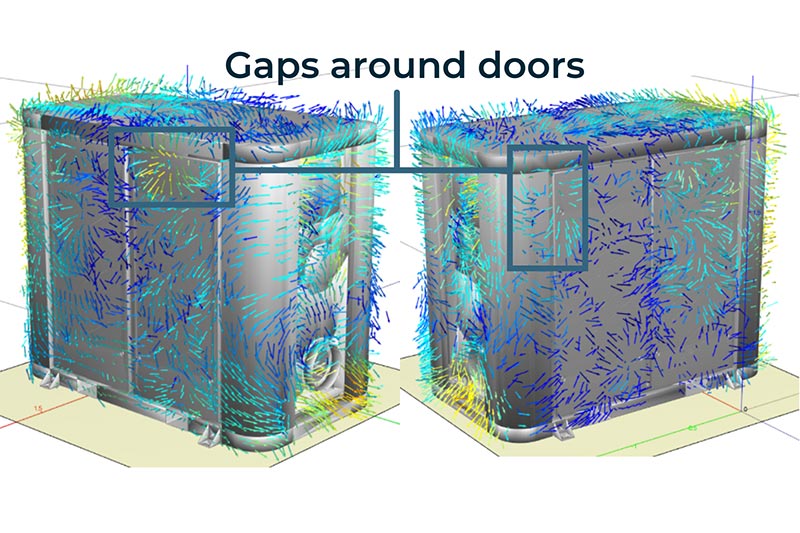