by Lontra and Severn Trent Water 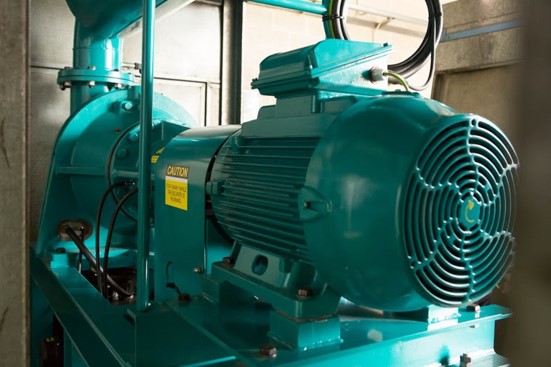 The underlying principle behind the technology at the heart of wastewater treatment has remained unchanged for nearly a century. But Severn Trent Water spotted the potential of Lontra’s new Blade Compressor®, a viable alternative to the traditional blowers and compressors that are used to pump air into wastewater to feed the micro-organisms that clean it. So, it undertook a site trial and performed exhaustive tests that have proven, beyond doubt, that the Blade Compressor® is a game-changer for the global water and wastewater utility businesses, delivering a step change reduction in electricity usage, maintenance costs and CO2 emissions.

Severn Trent’s wastewater treatment works operate around the clock, handling more than 2.5 billion litres of wastewater every day. Like all water and wastewater businesses, Severn Trent has to meet strict quality standards governing the treatment of the bacteria, organic matter and other materials contained within wastewater, before it is returned to the environment. In stringent tests, Severn Trent’s 1,026 treatment works met more than 99.5 per cent of the required standards. Operating and maintaining the vast network of sewers and treatment works is a huge and resource intensive engineering challenge that requires regular, large scale investment programmes to maintain the quality standards demanded by regulators, politicians and customers. The activated sludge process relies on the injection of air into tanks containing wastewater to encourage the large-scale growth of natural bacteria that break down the impurities it contains.

Depending on the type of wastewater being treated, the resulting liquid from this aeration process can usually be returned to the environment, although in some cases further treatment processes may be required. The traditional compressors, or “blowers”, used to inject air into wastewater use large quantities of electricity. Severn Trent spends around £9 million a year on electricity to run 300 blowers at its treatment works, more than half of the entire cost of wastewater treatment in the region. And industry estimates suggest that one per cent of all of the UK’s electricity is consumed by compressors used for the aeration of wastewater at the nation’s utility businesses.

Given the cost of electricity consumption – and the associated CO2 emissions – Severn Trent Water has been investigating alternative solutions with lower energy costs, improved operational efficiency and reduced environmental impact. 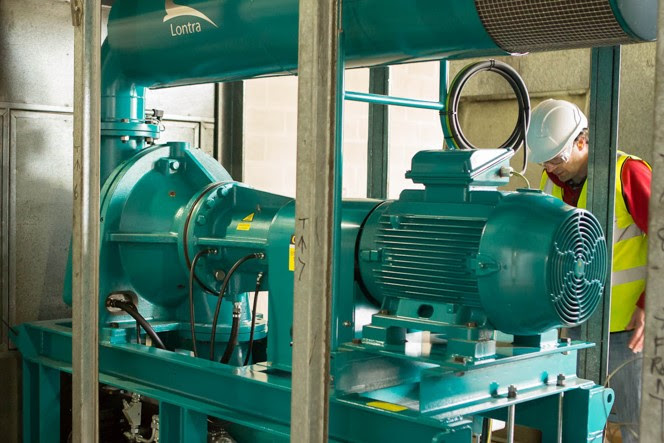 With its instincts for innovation to the fore, Severn Trent saw the tremendous potential in Lontra’s revolutionary Blade Compressor®, which takes the traditional compressor’s basic design and engineering principles and gives them a new spin – literally! With a traditional piston and cylinder, as the piston drops down in the cylinder it draws in air above it and, as it goes up again, it compresses air in front of it. The Lontra Blade Compressor® is best imagined as a piston and a cylinder, but with the piston wrapped around inside. There is a constantly open intake port, without valves.

As the piston rotates, it induces a volume of air behind it in the same way as the piston dropping down in the cylinder. As it gets back to the starting point, it has induced a complete volume behind it. But unlike the traditional piston and cylinder that has to stop and change in direction, the blade passes through the disc with the volume that was trapped behind the piston now in front. This means that it has an almost continuous cycle of inducing air behind and compressing air in front, a new geometry that is quieter, smoother and highly efficient.

The first step for Severn Trent was to work out how just how important the Lontra technology could be to its business and so the company worked for over a year with Lontra on a study evaluating its entire wastewater estate. The knowledge gained from this study allowed Lontra to take a fresh look at the challenges faced in wastewater treatment and to design a solution specifically optimised to the needs of the industry as whole. The results were so encouraging that Severn Trent agreed to part-fund a full-scale trial alongside the Carbon Trust, the organisation that assists businesses, governments and the public sector to accelerate the move to a sustainable low carbon economy.

And where better to validate the Lontra Blade Compressor®’s performance and reliability against existing machines, in a real time production environment, than back at Worcester Wastewater Treatment Works?

“To make the test as representative as possible, only the existing blower and motor were replaced, with the Lontra Blade Compressor® fitted into an existing enclosure and running from an existing variable speed drive. “This ensured that only the gains in the blower technology – and not those from optimising the supporting systems and drives – were captured.”

Energy savings of up to £1.8 million per year when rolled out across Severn Trent’s network of wastewater treatment works

Business-wide reduction in CO2 emissions of three per cent

Severn Trent had followed the development of Lontra for a number of years, providing financial support for its ongoing research and development activity

Exhaustive testing in a live, operational environment has demonstrated the reliability and performance of the Blade Compressor®

The Blade Compressor® will deliver a range of substantial financial, environmental and reputational benefits